The term of this week seems to be ‘defriending’. It’s not even in Wikipedia -yet- so it must be fresh. Website Marketing Facts writes about it, a sure sign that it is to be a trend for 2009. Basically, it means you clean up your social network so that only people who you’re actually in a friendly or closer relationship with remain. The basic premises behind this idea is that the value of your social network is higher, if the online equivalent reflects your offline one -or something like that.

It was fast-food chain Burger King who took defriending to a new level. With the Facebook app Whopper Sacrifice you earned a free Whopper for every 10 friendships you ended on Facebook. After a week, Facebook ended the viral as 233.000 friendships were sacrificed. 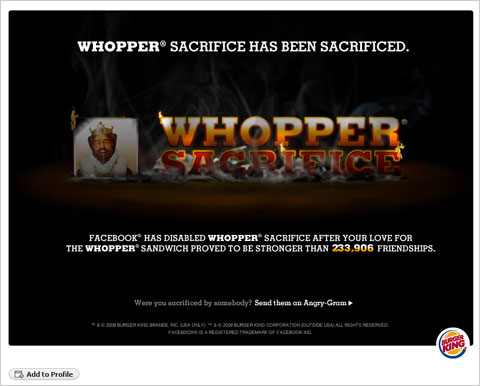 I think the whole assumption that your social network should have only “real friends” is wrong. At least, in my case. My social network is made up of people I’d like easy access to, and who do, like and know things I find interesting, and with whom I’d like to share some of the things I do and find interesting. I haven’t personally met all these people, nor have had contact with them. That doesn’t make their ideas any less valuable to me tho.

So why is the scope and extent of my social graph important for why I use Twitter? For that, I need to introduce you to the Dunbar Number. Dunbar is an anthropologist at the University College of London, who wrote a paper on Co-Evolution Of Neocortex Size, Group Size And Language In Humans where he hypothesizes:

… there is a cognitive limit to the number of individuals with whom any one person can maintain stable relationships, that this limit is a direct function of relative neocortex size, and that this in turn limits group size … the limit imposed by neocortical processing capacity is simply on the number of individuals with whom a stable inter-personal relationship can be maintained.

The number he calculated was 150. If you carry this number to the social graph, you could argue that the human brain is only able to cope with 150 or so stable relationships, thus anyone with a higher number of friends in any of their networks, has unstable relationships, and are therefore worth less then those with stable relationships. Thus, one should defriend and stabilize his graph. (for more info on this subject, read Christopher Allen’s great blog post The Dunbar Number as a limit to group size)

Like I said in my introduction, my online social network is my main access to a lot of inspiration. I have real life and long time friends there, family, co-workers, people I have worked with in real life, people I have collaborated with online, people I haven’t met and would like to meet some day, people I’ll probably never meet but whose ideas, skills and works I admire. I haven’t got stable relationships with 150 of them -probably far less. But they reflect on who I am, and how I like to be perceived, and what I do and don’t do, and what ideals I have and don’t have. They reflect on me.

Now, lets get to the topic of this post, why I use Twitter. Twitter is especially in the picture when the defriending topic sails along, as it is both easy to add people to your network (you just click ‘follow’ and you’re done) and for other people to add themselves to your network (all they have to do is follow you). But for me, Twitter isn’t just a representation of my social graph and an easy way to know what my friends are doing all day, but something else entirely. It is a source of inspiration.

This is something Stephen Fry pointed out in his talk at the Apple Store in London on Apple and Twitter and so forth. He basically said that the human race has a long history of exchanging ideas and transferring knowledge. He was talking about audiobooks, but the same applies to Twitter in my opinion -he is Twitter’s self proclaimed vice-president, as only Barack Obama has more followers then him.

Anyways, he basically says that with the invention of he printing press by Guttenberg, knowledge exchange moved from a social, interpersonal experience into a distanced, individual experience. Before the mass distribution of printed knowledge and experience, there were storytellers who, in different forms -songs, tales, plays, opera’s, etc.- immerse the listeners into the story, thus conferring it’s meaning and sharing its experiences and lessons. The most basic form of this oral distribution is the hearth. Around the hearth the storyteller is in direct contact with his or her audience, and shares not only his words, but also the non-verbal meaning, suspense, experience and even drama. Thus, making it a rich experience, probably anchoring the experience in the audiences minds far better then most books ever could.

This struck me as true, and I immediately followed this logic to my use of Twitter. To me, Twitter is the modern day hearth or village pump. It’s a place where I choose to go to and share my experiences, my daily finds, my emotional states, my inspirations with anyone who is interested -for whatever reason. And I look for other people’s experiences, knowledge, daily finds, etcetera as well.

And the beauty of Twitter -for me- is that it’s not long distance. Yes, it is a-synchronous, but I can reply to tweets, send them a direct message, and start conversations. In other words, the barrier to get in touch with the storyteller is very low. I can easily get in touch and enrich their experience with my own, and even build a relationship.

This is why Twitter for me is such a source of information, experience and inspiration. It lets me see things from a different perspective and surprise me with insights -both good and bad. It is the Social Graph and Social Network stripped of all web-technology-imposed barriers. I interact with other people, not with web applications or websites that aggregate the personal aspect to a manageable social blob. To me, Twitter is the modern day hearth.

Hi, I'm Herko! I'm a global digital health advocate on a mission to give everyone control over their personal health data. I love building thriving ecosystems where people from all shapes, sizes and perspectives join together to work on something greater -a new digital society based on a human commons. Here on my website I write about how technology makes us more human.

I use cookies on my website, stored on your own device to remember any preferences you set and load those by default on repeat visits. I do not use cookies to collect or track any of your data, or sell any data your visit to my website may generate.

Opt-out complete; your visits to this website will not be recorded by the Web Analytics tool. Note that if you clear your cookies, delete the opt-out cookie, or if you change computers or Web browsers, you will need to perform the opt-out procedure again.

You may choose to prevent this website from aggregating and analyzing the actions you take here. Doing so will protect your privacy, but will also prevent the owner from learning from your actions and creating a better experience for you and other users.

This opt out feature requires JavaScript.

The tracking opt-out feature requires cookies to be enabled.

This website uses cookies to improve your experience while you navigate through the website. Out of these cookies, the cookies that are categorized as necessary are stored on your browser as they are essential for the working of basic functionalities of the website. We also use third-party cookies that help us analyze and understand how you use this website. These cookies will be stored in your browser only with your consent. You also have the option to opt-out of these cookies. But opting out of some of these cookies may have an effect on your browsing experience.
Necessary Always Enabled
Necessary cookies are absolutely essential for the website to function properly. This category only includes cookies that ensures basic functionalities and security features of the website. These cookies do not store any personal information.
Functional
Functional cookies help to perform certain functionalities like sharing the content of the website on social media platforms, collect feedbacks, and other third-party features.
Performance
Performance cookies are used to understand and analyze the key performance indexes of the website which helps in delivering a better user experience for the visitors.
Analytics
Analytical cookies are used to understand how visitors interact with the website. These cookies help provide information on metrics the number of visitors, bounce rate, traffic source, etc.
Advertisement
Advertisement cookies are used to provide visitors with relevant ads and marketing campaigns. These cookies track visitors across websites and collect information to provide customized ads.
Others
Other uncategorized cookies are those that are being analyzed and have not been classified into a category as yet.
SAVE & ACCEPT